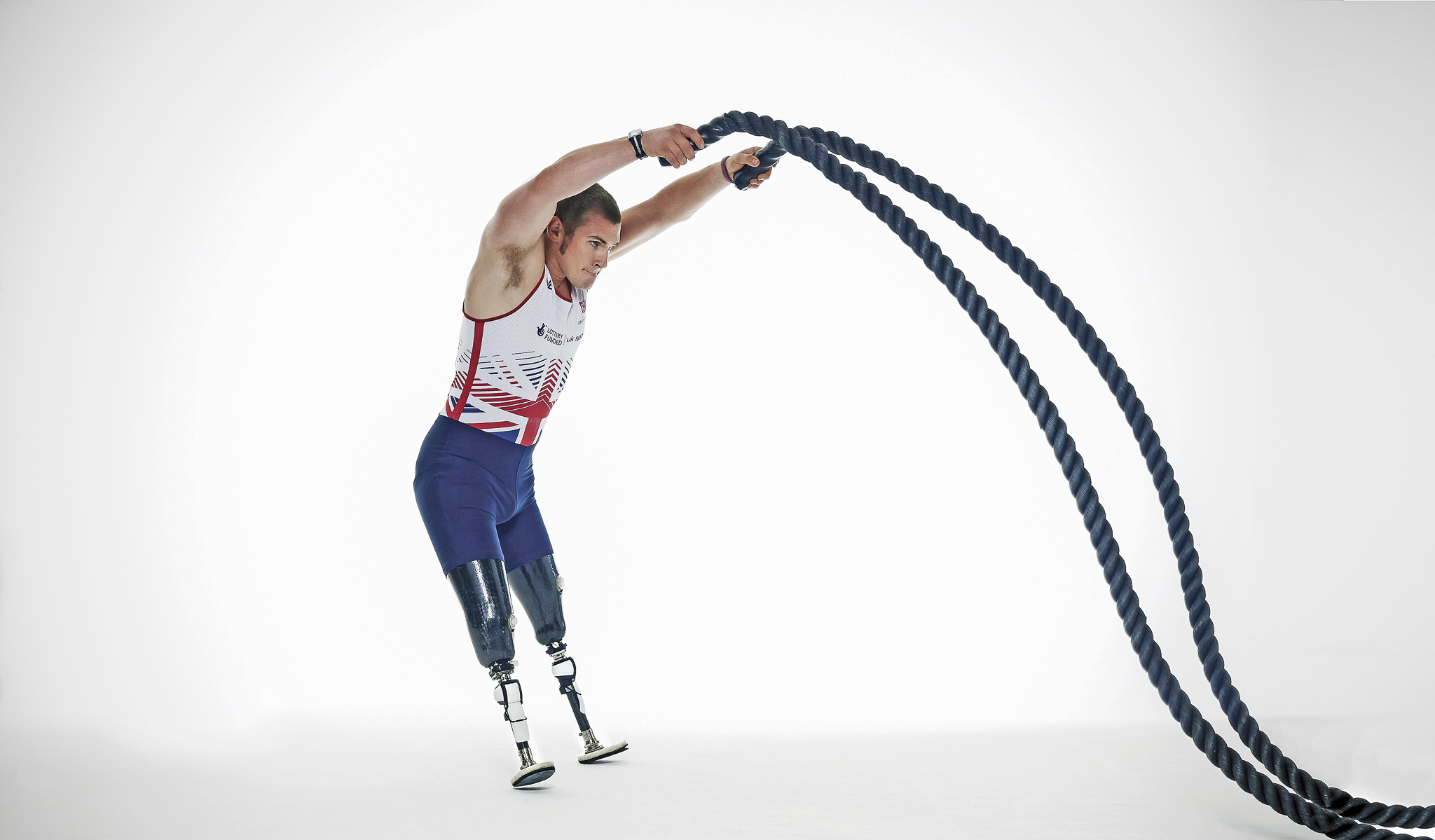 We invite you to read his story and write a response to him at the bottom of the page. Your feedback will be collated to let Scott see how he has influenced our readers, and to encourage others to join the conversation by sharing their own thoughts.

I grew up in Cumbernauld, just outside Glasgow. It was quite a rough area with a lot of distractions. I wasn’t massively engaged in school – not a troublemaker, I just found it hard to find a focus. But I always, always wanted to be a soldier.

At school, rugby kept me on the straight and narrow. Most of the guys I hung out with ended up in jail. It could have gone either way for me, but having the discipline of playing for the club, going out on that pitch every Sunday and knocking lumps out of somebody was the only thing that kept me sane.

At 16 I joined the army at the Foundation College in Harrogate. That’s where I really started coming into my own. Adults treated us as adults, and I thrived. From amounting to nothing at school, I went to the top of my class. I turned a huge corner there, and left a Junior Corporal. But after a year and a half I picked up a shoulder injury and was immediately discharged. My career was over. I had signed up for the job of my dreams and was loving life, I didn’t have a plan B. I was 17, back in Cumbernauld, and on the dole.

It’s funny how you have those moments, those conversations that change everything. I’d gone off the rails a bit. After waking one morning with a terrible hangover, a friend asked me if I wanted to play rugby with his team in Edinburgh. I played a decent first game, and as I came off the park a guy approached me. He was running a training camp in France for three weeks. A couple of players had dropped out; did I want to come? I phoned to quit my job there and then.

Playing rugby at a national level again gave me some real drive. With renewed purpose, I reapplied for the army. I fought my corner for 18 months, travelling all over the country to see different surgeons. I did as many press-ups as I could physically stand in the surgeon’s office to show how strong my shoulder was. He gave me a chance, and I was signed off to join the Parachute Regiment in May 2009.

It’s the hardest regiment. I spent the next seven months training in absolute hell. There were some really difficult moments, but it was more my body giving up, never my mind. My grandfather, who was a huge influence in my life, was terminally ill at the time. After my passing out parade, one of my proudest moments was going home to him in my uniform. On 25th January, Burns Night, he finally passed away.

A year to the day of his death, I was involved in an incident that would alter the course of my life again. Two halves of the patrol were out in Afghanistan, going north under the cover of darkness so as to catch the Taliban when it lifted. While getting into position, one of the lads, Liam, stepped on an IED (improvised explosive device) and lost both his legs.

Securing the area to provide cover for the helicopters, it soon became clear that this had become a recovery operation. We had to find Liam’s kit and weapon in the dark. We found other things. Parts of Liam’s equipment, parts of Liam. Just as we were leaving, we noticed his metal detector was missing and had to go back in. That’s when my friend, Martin Bell, and I walked onto the track. He said, “We’ve seen enough, this is getting too dangerous”. As I turned around, I breathed a deep sigh of relief. We didn’t have to search any further, we could go back the way we came. I took two steps and everything went black.

It was like being tackled and punched in the face at the same time. I knew what had happened before it even detonated. When I found myself on my back, unable to move, I thought, “I’m dead, I can’t believe I’ve gone and died”. As my poor mum mourned the anniversary of her father’s death, she was going to get that knock on the door. My world passed in slow motion, my ears were ringing. Then all of a sudden, everything came rushing back. I looked up and saw a big, beautiful, blue sky and the sound of everyone shouting around me. As I came to, I started putting tourniquets on my legs to stop the bleeding. Five paratroopers circled in and put me on a stretcher. The boys had got me, I was going home.

Martin Bell had stepped on another IED and he was cut in half. It killed him instantly and wounded everyone else on the stretcher. Two lads were still compos mentis, despite suffering severe burns and injuries. Gavin had been totally blinded, but he kept his hand on the stretcher and dragged me out of the minefield. It was the bravest thing I’ve ever seen. They got me back, and five of us went up in a helicopter to Camp Bastion where I received life-saving surgery. Within six hours of being wounded, I was back in the UK.

I woke up from an induced coma to see my mum and dad standing in front of me. It was a huge relief to be home. I would spend the next four months in hospital. As well as losing both legs, I needed significant reconstructive surgery to repair the many internal and external injuries I had sustained. It was a pretty hard time. My world had been turned upside down. I’d gone from being as fit and capable as a human being can be, to having somebody brush my teeth and roll me over to wash me. I was never going to be a rugby player or a soldier again. I had to start looking for a new playing field.

I gave myself short-term goals to achieve: getting out of bed, getting into the wheelchair, getting to the end of the corridor. When I got there, I was so exhausted my mum had to push me back. I tested my limits every day. When I got to Headley Court Rehabilitation Centre, I made walking a priority. I didn’t want to stay in a wheelchair, so I was damned focused. The day I got my test sockets, I pushed my wheelchair to the other side of the room. These were my legs now.

I started off on stubbies. They’re like small, tin legs, and the minute I got them I insisted on walking everywhere. I wasn’t going to use my stick. I got to Headley Court on a Wednesday and I was walking on stubbies by the Friday morning. I’m pretty stubborn.

For the next year I made rehab my absolute goal. I would pick somebody who was at a place in recovery that I wanted to be, and paint a target on their back. I’d spend however long it took me to come to their level and then find myself surpassing them. I’d be on my legs and I’d think, I’ve learned to walk so I need to learn to run, I’m going to walk on different surfaces, now I’m going to climb. I became really competitive, but that was good for me.

A quote we always used in the regiment is, “Paratroopers never take the easy option”. So in rehab I thought, never make it easy for yourself, do something no one else is doing. I learned by doing and trying and failing.

Sport was really important to my recovery. I got into rowing by chance. I had a colostomy bag because of the internal injuries, and I needed to lose some weight around my stomach for the surgery to have it reversed. I had a spare weekend in London and was staying with my mate Kingsley, who had lost three limbs in the war. I received an email about a rowing development camp there and thought, why not?

Rowing up and down the docks in London humbled me. It buried me. I realised I wasn’t the guy I used to be. But actually, by putting myself in a new hole, the feeling of confidence it gave me lifted me to another level. I didn’t care what it took, I wanted to train full time.

Coached voluntarily by my mate John Blair, we trained seven days a week for 18 months, focusing everything on making the Great Britain rowing team. After my performance at the Invictus Games selection, I made the selection for Team GB that December.

Rowing was a game changer for me. It has restored in me the infectious optimism I had as a paratrooper. It saved my life and redefined me as an athlete. I would like to think I’m no longer known as a wounded soldier. For a long time I was labelled by the media as the boy that Martin Bell saved. Martin Bell put his life on the line and saved Scott Meenagh, how does it feel being alive while your friend is dead? How does it feel being the guy who lost his legs? I don’t want to be known as that. I want people to know me as a developing Great Britain athlete who is punching his weight on the world stage.

It’s been a crazy few years and not without dark days, but you have to find coping strategies that work for you. Peaks and troughs are always going to happen. It’s about keeping the troughs shallow and short, and knowing how to pull yourself out of them, switch fire and refocus. I’ve got a lot to be grateful for. I’ve got a lot of amazing people around me in life – mentors and role models, people who don’t even know the influence they’ve had. Some have changed my life forever. I like to put targets on people’s backs who I think are good, and try to surround myself with those who give positive energy.

Thank you for reading Scott’s story, now we’d like to hear from you.